CaredFor supports Markdown syntax as a way for admins to format the text used in content posts. When posting content or an event from the Dashboard, Admins can use Markdown to format the description text.

How Does Markdown Work?

Markdown uses special characters before and after words or phrases to apply the formatting. Here is a list and examples of the formatting options we support.

To bold a word for phrase, include ** before and after. For example **bold me** would be displayed as bold me.

To italicize a word or phrase, include * before and after. For example *italicize me* would be displayed as italicize me.

"#" followed by a space and the word or phrase will create an H1. For example # Section One would be displayed as the largest type of heading. Be sure to put a space between the # and your text.

"##" followed by a space and the word or phrase will create an H2. For example ## Smaller Section Heading would be displayed as a smaller heading.

"-" followed by a space and the word or phrase will create a list. Using a - in front of each item would be displayed as:

Using this formatting will make the phone number clickable within the app. When a member taps it, it will prompt them to open the dialer app on their phone to call the provided number. The format is:

[phone number as you want it displayed](tel:+full number with country code) 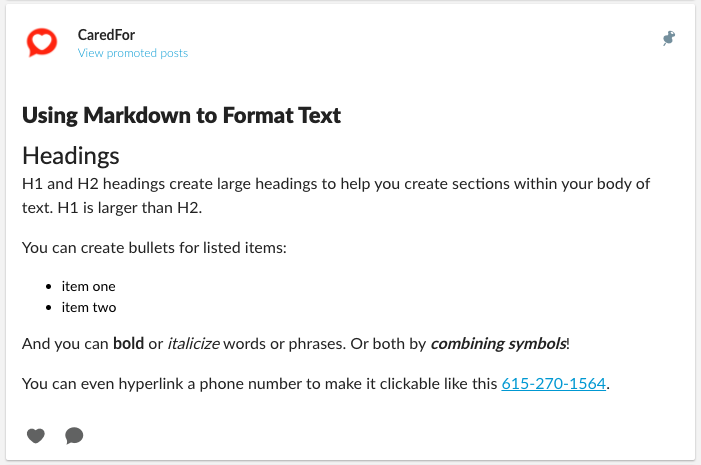 Additional questions about text formatting in the CaredFor app using Markdown? Reach out to us at support@caredfor.com.

Did this answer your question? Thanks for the feedback There was a problem submitting your feedback. Please try again later.
Last updated on April 16, 2021